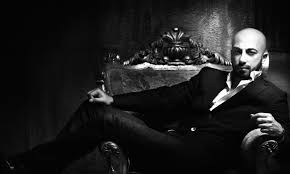 Hassan Sheheryar Yasin aka HSY has had quite the year. Standing out of the crowd, the man has achieved so much success in recent times that it’s been hard not to notice his efforts. Although he’s already known to have a golden touch when it comes to designs and hosting, his acting is what has sparked conversation throughout the internet.

Out of all the series we’ve seen this year, Pehli Si Mohabbat would have to be at the top of our list, and designer, tv host, acting debutant HSY has amazed audiences with his marvelous performance as the once patriarchal figure, Akram. His role seriously had fans buzzing for more! People could hardly believe that this role was going to be played by the icon himself but HSY made it look effortless and his performance had everyone glued to their seats. Of course, this was no easy task. The superstar had to do his fair share of training in acting as he admitted to sharpening his Urdu for the role as well. His acting was truly phenomenal and it’s no wonder he impressed audiences with his character through and through.

When PSM first started, we were sure that Akram would be the villain of the series, making his black and white mindset understood to anyone who tried to get in his way. As someone with a self-righteous outlook, it could easily be assumed that he would make trouble for everyone. However, as the series progressed, we saw this character radically evolve in so many ways. Showing more than just anger as his standard emotion, in the later episodes, particularly after Zainab’s death, viewers could see sorrow, grief, worry, remorse and so much more. It is safe to say that Akram’s transformation made a huge impact on the drama serial. Perhaps viewers can even extract a lesson out of the once patriarchal figure. Where before he didn’t consider anything over his own family’s reputation, he later softened to all his family members as well as former neighbors.

We just have to give it up to HSY for making this character profoundly memorable and bringing to life someone so different from himself. Always bringing something fresh and new to the table, it is safe to say that the superstar’s acting is just as awesome as his other works. We loved every minute of Akram on screen and we hope to see HSY in more leading roles!

Hira Tareen is back with a bang !

J.fragrances organized a star studded meet & greet at the historical...

HSY’s Performance As Akram Is One For The Books

L’Oréal Paris Reaffirms its Commitment to“Stand Up Against Street Harassment” at...

October 25, 2021
- Advertisement -
This error message is only visible to WordPress admins